Have you ever had a blonde moment? Or just a moving to fast you forget to know..or just not paying attention enough? 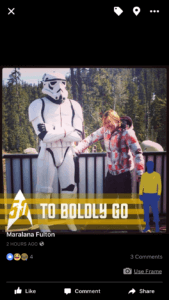 Well this morning I had quite the brain fart as I had Star Wars on the brain after watching the movie again last night. So this morning as I quickly skim through FB I see 50 years celebration of Star.. ( ok this is where my brain went foggy) I quickly looked through my profile pics to find one and bam there it was. Posted and ready to go….

It only took a minute to get called out for my mishap as my BF stated are you trying to cause a nerdy revolt. And in his brain I’m sure he was saying.

” I thought I trained her better?”

I had no idea what he was talking about until I looked back at the picture. It was a Star Wars picture with a Star Trek frame. Yikes!!

Now a lot of people are like “Um ok? So what” while others are like “Um No? Are you kidding me?” And well I’m with the later. 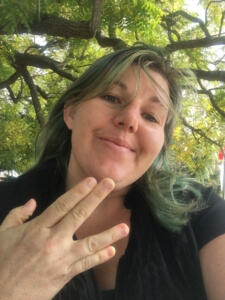 I know better! I know the difference between Live Long & Prosper, May the Force be with you and To infinity and Beyond. (hahaha sorry had to throw that in). And I don’t mean knowing them by the new movies. I grew up watching Star Trek with my family and my boyfriend was right He has trained me well.. He geeks out on that stuff like the best of them. But as always, I was in a hurry and didn’t read correctly what anniversary it really was.

I know the difference between and where they belong:

This bothers me! Have I become such a skimmer as to miss such important details. And while we are at it, just how important missing  just one word can be!

Somehow I just Jedi mind tricked myself into being more conscious of the things I’m writing, reading, and hopefully posting before I start another nerd war and look like an idiot. Mission accomplished… lesson learned!

In all fairness, if I had posted said picture on purpose it would’ve been an Epic prank. So to all the Trekkies out there sorry for tainting your legacy with my whoopsie!

In honor of Star Treks 50th anniversary let’s talk Star Trek vs Star Wars? Thoughts? Better yet, Have you ever gotten them mixed up?

Thank you for subscribing.

we respect your privacy and take protecting it seriously